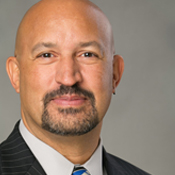 Ernie will be participating in the Dad's Panel

Ernest Jackson lives in Arizona with his wife, Kristine. In 2009, the Jackson family was transformed forever when nine-year-old Quinton Stone Jackson, son of Ernest and Kristine and brother of Cheyanne, was killed in a tragic accident during the family’s annual vacation.

In this memoir, Ernie explores his family’s lives leading up to the crash and details the accident and its resulting effects on Quinton’s family. “Quinton’s Messages” follows Ernie and his family’s journeys through the tragedy. As he attempted to find meaning for his life, Ernie scrutinized his job and the busy work is involved, and he realized that he had higher aspirations.

He sought direction for his life, and he found that following his son’s death when he needed direction the most. Ernie also shares the eye-opening events that followed Quinton’s death as Quinton visited them and left messages for Ernie and his family after his transition. These experiences opened the family’s reality to a much larger universe. A story of loss, grief, and hope, Quinton’s Messages recounts how the Jackson family survived the sorrow they experienced after the loss of their beloved son and brother.

To learn more about Ernie, visit his website at http://www.quintonsmessages.com/