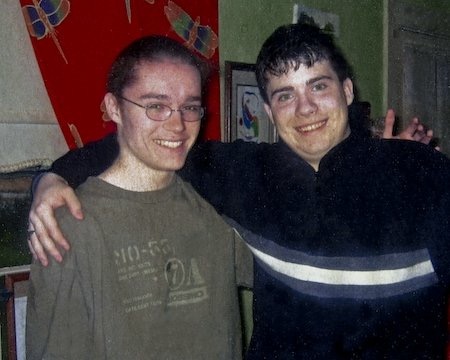 “Profound” was the word I wrote down in my desktop calendar immediately following my reading with spiritual medium Susanne Wilson. It has now been several weeks since my reading in January 2019, and I have listened to the recording of that reading several times as well. Now I’ll attempt to add a few more words to my initial reaction and convey just what I meant and felt with the one word “profound”.

The screensaver on my cell phone is an older photo of two young guys, young men if you will. One’s around 15 and the fellow next to him 17. Both boys are elated to be together and show it fully in the photo. The younger boy is my son and the older one, my life partner’s son. They were close. Geeky, yet close. My son died in 2007. Her son, Wendy’s son, died in 2016.

That image on my phone’s screensaver, that old photo, is the only photo any of us parents have of our two sons together. One can sense that it is strong imagery.

When Susanne Wilson announced the presence of two young males coming through to her in spirit my heart knew with quivers what was happening right before me. I quietly listened as Susanne shared the images, feelings, intuitions, and evidence in the beginning minutes of her reading. I listened with awe. I listened in amazement. I listened with tears. I listened with very deep breaths as can be heard on the recording.

By the time that Susanne paused and asked me if any of the things she had just been saying made any sense to me, she had clearly introduced my son together with Wendy’s son, while those two were accompanied by my father who passed in 1996 and my uncle who followed him in 2011. By the end of the reading, not only had my German mother-in-law made herself and her many kinfolk in spirit known, but the personalities and evidential traits of all the initial male energies that had arrived were fleshed out more and more.

This reading was my first. It was not, however, the first reading I had ever heard. It was my second. The first reading that I had ever heard was one Suzanne Giesemann provided for my life partner, Wendy, a few months after the passing of her only child, Daniel. This reading alone deserves a whole book dedicated to elaborating on the evidence brought through in it. For now, suffice it to say that the evidence which Suzanne Giesemann presented forced me to alter my theretofore skeptical mind and acknowledge a reality beyond these physical lives.

This openness to and acceptance of spirit and its implications perhaps set the stage for Susanne Wilson’s channeling of the multiple enthusiastic loved ones on the other side whose presence was clear to me. Susanne’s reading started out with references that were unmistakably Wendy’s son, Daniel, who had already done such a reading before and somehow had great skill at communicating with us physical beings. The “cat person” references that came through Susanne were so exaggerated and precise that I simply wept with joy while acknowledging that: yep, I get it, Daniel. His name, by the way, would come up later.

Daniel had a second male energy with him and was leading this other loved one to the forefront of the reading by then. It was my son.

I continued to listen intently as Susanne described my son. He, on his part, was accompanied by two additional yet much older male figures. A simple number reference was enough and in an instant, there was this knowing that it was my dad. He had shown up together with his brother who had well outlived my dad. Both men had died of cancer. This evidence came out clearly later on.

Fun, quirky family facts came through that highlighted unmistakable times of shared love and joy; well, mostly love and joy. My uncle’s name, as well as jaw-dropping facts about his life, came up. The energy that I experienced during all this was beautifully tearful.

My German mother-in-law not only gave a good portrayal of her character but also clearly stated the family name for whom she stood as representative. All of my son’s German ancestors and relatives were represented and doting on him as well. My loss was their gain.

Susanne then spent quite some time elaborating on the images and intuitions and visions associated with my deceased son. She painted a portrait of my son’s character that became ever more real. Even though “complicated”, my son’s name was eventually revealed. His brilliance came through. He was indeed pensive. Yes, there was a certain German angst in him as well. And then Susanne rushed to emphasize that my son was quite happy now, just so no one got the wrong idea. He even spared her the details of his passing, which was quite fitting.
I knew those details.

She had no need to carry that burden. It was just the details after all.
The reading in its totality can be characterized as fun and flowing and full of excited, eager beings of love rejoicing in the opportunity to connect with me and any others close enough to get something out of such a reading. This energy was also validated to me by distinct personal facts and feelings.  I certainly acknowledge the blessings that I have received not only from Susanne Wilson’s reading but also the many other signs and wonders in my life that confirm spirit to me and comfort me in knowing that love never dies. That’s pretty profound.