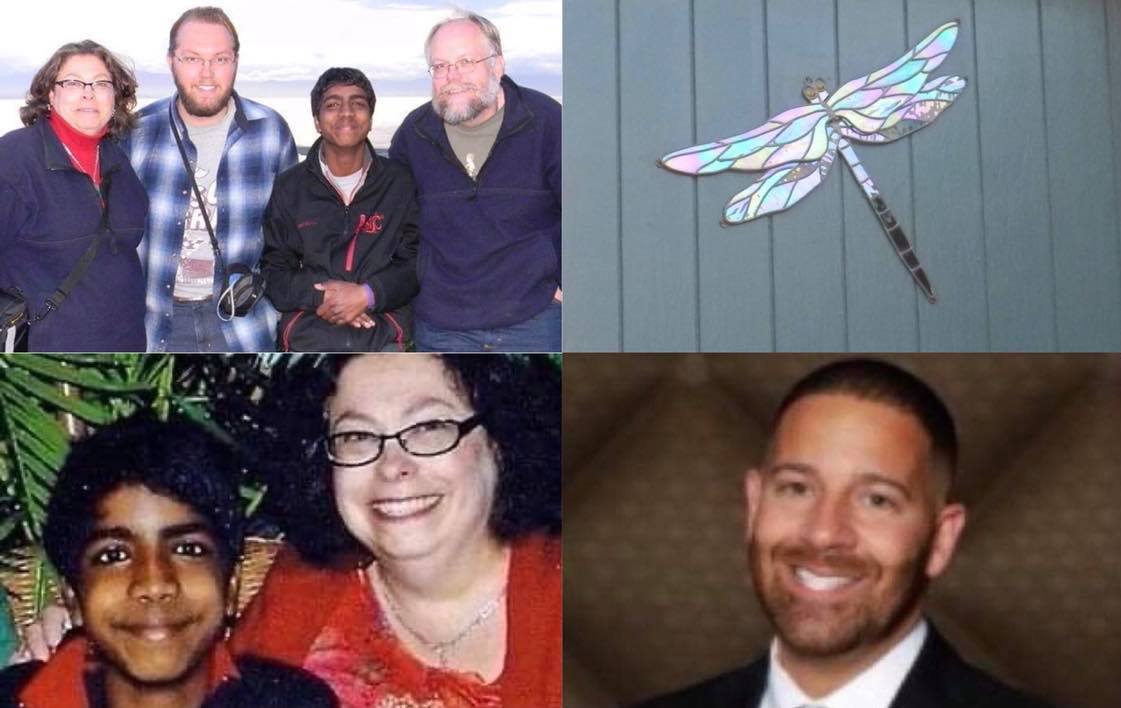 Ally Ally Oh day. The last day of September 2021. A reminder Helping Parents Heal were holding a meeting with Daniel John came up in my notifications. On a day and at a time I could participate. I decided to participate and this time instead of watching and hoping I went to my son Peter Kiran, standing at his urn I ask him directly to please come.  Didn’t know if he would.  Figured only time would tell. Welp, he did come. And it was amazing.

Instead of doing a Q and A to start the meeting as planned Daniel went right into readings. As he began to share details – an M name, 13 or Jan 3rd – my ears pricked up. Thoughts of it couldn’t be Peter, could it? Someone with a good sense of humor, someone who experienced a lot… Daniel connected with another amazing mum but I felt strongly connected with all that Daniel was sharing. I assumed Peter must be doing what I have learned is piggy backing. More details were shared. A train. A triangle. Reassurances…. I noticed at one point Mark Ireland asked Daniel if he was with the right mum. The reading continued a little longer with more that rang very strongly with me.

On finishing with the first Mum Daniel immediately pick up on the brief message I posted in the chat and came right to me. January 3rd. I confirmed that was my son’s birthday. An M name? Matt or Matthew? Logically speaking M is for our family name Mattson but in our family “M is for Peter” as he proudly declared when very young and excited when connecting he was a Mattson. The train? A trip across India to come home to us. The triangle? His birth mother and I. One that comes with great pain but also respect for a mother who had to make a most difficult decision. Clothes Pin and Snoopy? From what I experienced through the loss of Peter my brain still struggles to function and remember things. Afterward I remembered we used clothes pins in scouts to track progress. I have Peters clothes pin put away. A piano student of mine loves Snoopy. Peter was her first crush, and he knew it. She would stare at him so intently with her bright blues eye. It freaked him out, but he quietly adored her too.

I had to giggle when Daniel asked if his Dad and I are still together. Yes, Allan and I are still together. That said when Peter was very young the realization Allan was not his biological father as he had firmly believed, but his adoptive Dad, was a shock. Peter loved his Dad so much, and yes I take care of Allan. Some how we have been able to balance our struggles through grief and care for each other.

Rice crispy’s? Treats or Snack bars? Snack bars. LOL. In middle school Peter convinced me he needed more snacks. Lunch was ridiculously early and he needed them for later in the day. I got him the extra snack bars and learned later Peter Kiran had been selling them to students, and teachers, and had made a nice profit to boot. We made rice crispy treats all the time.

A K name? By this point my brain was going into over load. That could be Karuna who was an orphanage sibling, Karen a family friend, Aunty Kay.  Someone who connects with Peter, and likely is able to sense energy? Yes. Aunty Kay. I have learned she has a photo of Peter in the house, she looks directly into his eyes in that photo and talks to him directly. She often feels him with her, and she feels the energy and presence of others.

Daniel noted someone toasts or toasted Peter every time they had a drink. I didn’t know who that is. It could be any number of Peters friends. I have since learned it was Nathan, another best friend in scouts. They were like peas in a pod. Similar builds but while Peter had black hair Nathan was very fair haired. I have reached out to all these amazing people.

My hair? Had I gone to lots of appointments or missed many appointments? It had been a long time before I could get my hair cut. Afterall, covid. Now, if we are talking of many appointments related to hair I have been doing some laser hair removal (TMI?). I can totally hear Peter laughing about this and thinking it’s hilarious. I do plan to get the hair on my head done again soon.

Daniel asked about Peter Kiran’s bedroom. We did a little rearranging in there, changed his curtains and bedspread. His brother Alexander has Peters weight set. Yes, on the whole it remains as he left it. We will likely keep Peter Kiran’s bedroom as it is. A cozy and happy place with his things. It was lovely to have Daniel recognize this and be so reassuring to me this is ok. Daniel then brought up a white hat. Peter has a number of hats, lots of hats, some white. He loved hats. All are still in his room.

A rainbow? Do we have a rainbow? Yes, we have a rainbow. A special and specific rainbow. A rare fire rainbow. It appeared in the sky over Puget Sound where Peters older brother Alexander lives. These rainbows are unheard of in Washington State. We had no idea about it until the day after Peter Kiran took his life. A friend sent me a news article that included a photo. The article noted when it appeared. About the time Peter Kiran had died. The rainbow contains vivid colors flaming toward the heavens, a beautiful heart, and at the bottom of the photo a tiny image can be seen flying into the ether. My immediate response was Peter had turned to light and color. No surprise here and very fitting. His Indian name Kiran means Ray of Light. Peter lived by his name and brought light to everyone he met.

Four-Leaf Clovers? Yes, I have a collection of them. At our old house, Peter Kiran’s first home, we found a number of them. They are pressed in a book that is somewhere safe in the house.

A ring? Yes, there is a ring. Peter was a huge Lord of the Rings fan. During our last trip to New Zealand as a treat we got to take him to visit Hobbiton. We got Peter a LoR ring for what was his last Christmas.

Peter had a great sense of humor. He was a prankster and story teller. The best was sadly his last. The story of his arranged marriage where he would come back to school for senior year as a married man.  He had everyone including a teacher believing him. It was hilarious.

Peter had many experiences in his far too short a life. He was well traveled for one so young. First across the great continent of India, around the world to us in the US. Over time to Australia for a holiday and New Zealand to spend time with family. We made a number of family camping trips having all sorts of experiences and meeting many amazing people. We did so much together as a family.

As far as problems with things like electronics and batteries going dead that Daniel brought up, yes this happens all the time. More so of late our batteries are in an eternal need of recharging and replacing, especially with the tv control. Peter plays with our lights, monkeys with my laptop, has knocked on our front door numerous times, and even left a couple of voice messages on our answering machines.

Christmas? Christmas is special. Do we do the same thing every year? Yes. Christmas has been difficult without Peter. Daniel was very reassuring this Christmas will be better. We will know Peter is with us.

Daniel brought up Matthew 13 – The Parable of the Sower. Fitting. Peter was amazing. Talented with a loving heart. A gentle soul who connected to all sorts of people of all ages. Peter was the person who invited those alone to the table. He listened to those in need of an ear and supported many during their own dark moments saving others from suicide before, and after, his own.

Daniel shared so many reassurances that Peter Kiran knows all I did for him. So much validation. Much needed validation. Yes, as his Mum I did my best. I have struggled with guilt. So much guilt about not knowing how much he had struggled, that I wasn’t able to stop him. Peter died by suicide in June 2015. Letting go of the guilt is a long slow process. Yes, we had a special connection. We would talk about all sorts of things and shared many special moments. I did my best for Peter to know how much I love him and that he could come to me for anything, any time, no matter what. I tried so hard to help Peter see how amazing he was. Seeing me smile and laugh at some of the details Daniel said I need to smile more, and continue to sing. I am working on that.

After all Daniel shared with me, and there was so very much, I find myself feeling a little overwhelmed by all he said was clearly for me but full in a way that is hard to explain. Full and with a more complete heart. Not a fully healed heart but more complete than it has been for so long. 6 ¼ years long so far.

After my reading ended Daniel moved on for someone else. He brought up the name Pedro. I didn’t say anything. Didn’t want to take away from another parent’s chance to hear from Daniel. A number of Peters wrestling buddies, and another scout dad, called him Pedro.

Thank you so very much Daniel John, Irene, and Mark, and Helping Parents Heal!