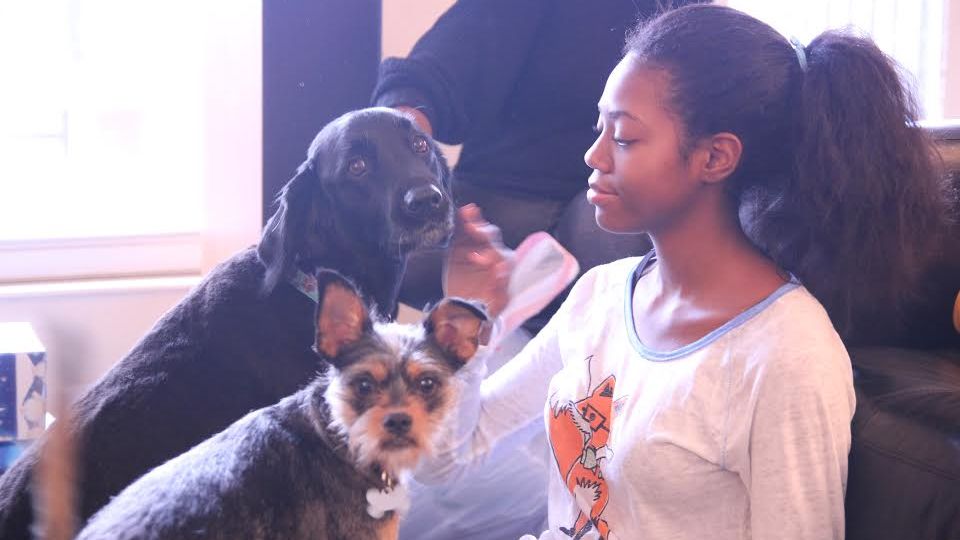 Our 14-year-old lab mix began slowing down a few months ago. I knew the day that we would have to say goodbye was coming soon. I could not bring myself to let her go. She was no longer able to go up and down the steps to the deck. Her legs would give out on her, and she would collapse to the floor. On Tuesday, we took her to the vet to see if there was anything we could do to help her. What we were told is what we knew. She was a 60 pound (down to 53 pounds due to muscle loss), almost 15-year-old dog. Her body was preparing to go home. The gray hair, cataracts, the hearing loss all told the tale that I turned a blind eye to. The seizures were what finally woke me up to reality. By Thursday Zoe was so bad I knew it was only a matter of a few days. I happened to have scheduled a reading with a medium in training. We scheduled it a few weeks ago. Thursday was an incredibly difficult day for me. I had this reading and a meeting scheduled for the afternoon. Zoe was in her room. She couldn't get up to get out of it and spend the day in my office or Tywana's office. I avoided walking by her door knowing she'd look up at me with eyes that seemed to say, "How much longer are we going to do this, Daddy?" The medium reading opened with Andy saying to me, "I saw you before we got on the Zoom. You were in a room, with falling red hearts. They are all shades of red." She continued, "I see in your aura an almost heartache. This is a heartache that isn't here yet. But, you know it's coming. You are going to have a conversation about it." I broke down in tears. She told me, "The spirit world is at the ready. This is the greatest gift you can give. I see fur hugs all around you. Fur hugs." On Friday, I had to carry Zoe out of the house to get her to pee. She collapsed, trying to get back into the house. I heard a voice say to Tywana, "It's time." The voice was mine. We made arrangements to take Zoe in the following morning. We had a full day of moving Kayla, my 22-year-old daughter, into her new house. Zoe took precedence though. We didn't want her to suffer one day longer than necessary. Zoe made a peaceful, quick transition. After we left the vet's office, Kayla told us that she saw Shayna in the corner of the room, waiting to greet Zoe. I had told Shayna that morning that she better be there to greet Zoe. I was elated to hear this from Kayla. I spent the rest of the day at Kayla's house assembling her IKEA furniture. It had been an exhausting day, physically and emotionally. I nearly quit and opted to finish on Sunday. But, I wanted to get it done and finished up. When I got home, I saw a Facebook notice that Cyrus Kirkpatrick was hosting an event with Susanne Wilson on Sunday. Since I got the furniture done on Saturday, I penciled it in on my calendar. I'd attend if I were up to it. I had been trying to reach Susanne to tell her about my book because she had encouraged me to write it several times. Also, in my first real medium reading, three years ago, she told me I would be working with Victor Zammit. I was in the Friday Afterlife Report this very week. I wanted to give her the validation of her reading. Sunday rolled around, and I connected to the Zoom. I quickly told Susanne about my book and the Afterlife Report. She and Cyrus did their interview, and it was time for questions and answers. Usually, I would hang back and let others ask questions. And, I already knew the answer to my question. I just had to hear her say it. I asked, "Susanne, I had to put my dog to sleep yesterday. I've heard that when people cross over their pets are there to greet them. Have you ever heard that when a pet crosses over, their human is there to greet them?" She assured me this happens. Then, she paused, and a quizzical look came over her face. She asked if I saw Zoe's soul as it left her body because she was being told that I experienced her crossing. I had prayed for a shared crossing experience. I didn't get it directly. But, at one point, I felt like Zoe's soul passed through me. Susanne described it as a not going up but going through a "whoosh." This is precisely what I felt. She said she saw Shayna with braids rubbing her braids across Zoe as Zoe lay on her lap. Then, she said, "Shayna says she was in the corner of the room." I was floored. Shayna in the corner was exactly the way Kayla had described it. It's been three days since Zoe crossed. The grief comes in waves. I am grateful for her life, love, and loyalty. I will miss her tremendously. But, even during all of the pain, I am glad that I am open to see how the universe continues to support me. The timing of the reading with Andy was no coincidence. The timing of the meeting with Susanne was no coincidence. And the message of validation of Shayna being there in the room brings me great comfort by letting me know for certain my two girls are together!